How Can We Fix NJ’s Broken Tax Code? 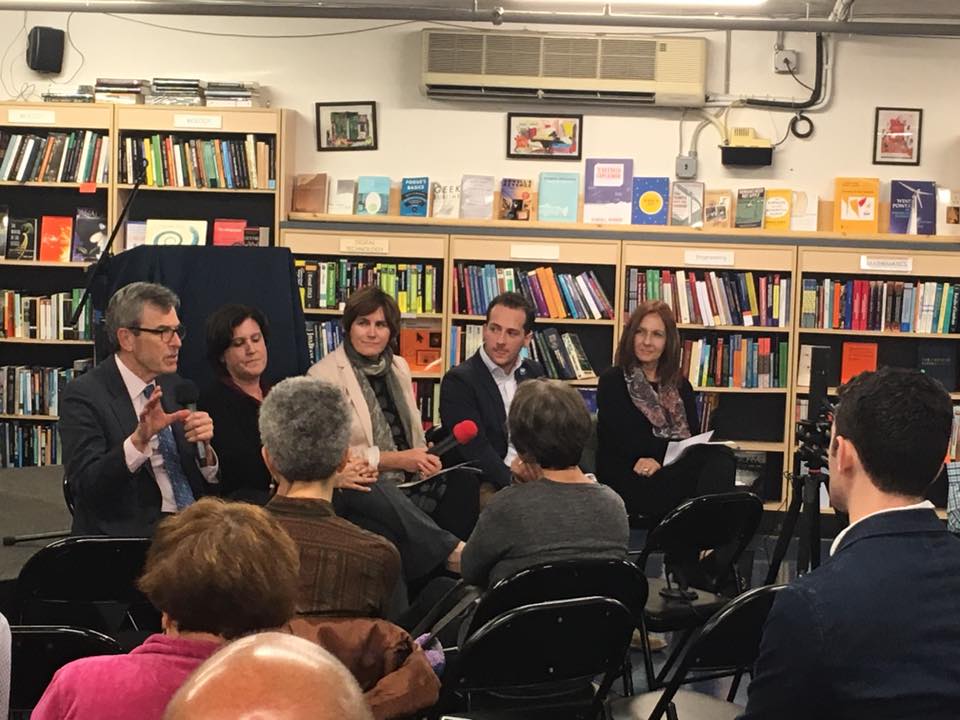 Panelists from three New Jersey organizations and STAND Central NJ gathered on Monday, October 1st, to describe the economic mess New Jersey is in, explain how we got there, and provide a blueprint for getting out of it! At the heart of the solution is changing New Jersey’s tax code, which has unfortunately redistributed billions of dollars to corporations and wealthy families over the last 8 years. For the new governor and state legislature taking office next year, repairing New Jersey’s budget and fixing our tax code is of the highest priority. But elected officials can’t do it alone — grassroots groups and citizens have a vital role to play.

New Jersey’s economic woes are probably not news to you. Newspaper headlines and the daily lived experience of New Jerseyans constantly confirm their existence. NJ Transit is barely functional, college tuition costs never stop rising, property taxes are exorbitant, the state credit rating is the second lowest in the country, and the state fiscal health rating is the worst!  Our state is now a jaw-dropping $10 billion in debt. And now, we find ourselves “on a collision course between years of reckless state budgets…and everything that’s happening at the federal level”, said panelist Louis diPaolo, legislative coordinator for NJ Working Families Alliance. 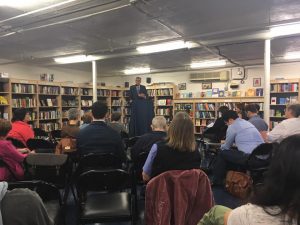 And yet, the state of New Jersey has many advantages over other states, according to New Jersey Policy Perspective (NJPP) president, Gordon McInnes, another panelist. Our central location between New York City and Philadelphia is unique in the country, and attracts all those who work in the city, but don’t want to live there. New Jerseyans represent a highly trained workforce. Our schools are outstanding, second only to Massachusetts. Immigrants flock to our state and benefit the state economy. Over the last 10 years, New Jersey’s economy was worth $2.4 trillion. With all of these advantages, why is New Jersey in such bad shape?

WHO MADE THE MESS?

For the last 25 years, our state’s assets “have been ignored, underfunded and almost driven to ruin” by state tax cuts that have mostly benefited the wealthy, according to policy experts at NJPP. McInnes explained how a 30% cut in the state income tax (a tax which is supposed to exist to help reduce property taxes, as per our state constitution) has led to a loss of $10 billion which could have gone to property tax relief. At around the same time said McInnes, governors and other state leaders were discovering that state pension funds “make great ATMS.”

These economic maneuvers did not benefit all New Jerseyans equally. In fact, state budgets and tax cuts disproportionately prioritized the wealthiest corporations and families in the state, and not the average New Jerseyan. diPaolo and Sheila Reynertson, senior policy analyst at NJPP, gave two examples: 1) our income tax code is regressive, with New Jerseyans who make more than $750,000 a year actually paying at a lower rate than everyone else, and 2) last year’s inherited wealth tax cut benefited only the 100 wealthiest families in the state, but costs New Jersey $500 million a year! When the state legislature has tried to make our income tax brackets more equitable by raising the highest bracket rates, Gov. Christie has vetoed their legislation.

HOW TO CLEAN UP THE MESS 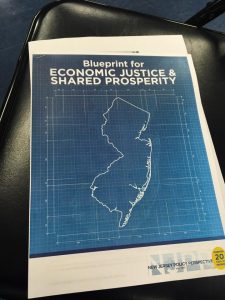 NJPP has a plan: a Blueprint for Economic Justice and Shared Prosperity. The crux of this plan is fixing the tax code so that the wealthy New Jerseyans who have benefitted the most from previous tax cuts will once again pay their fair share. This is especially important at a time like the present, when income inequality is on a steep rise and the state faces severe budget problems, said Reynertson. The Blueprint recommends raising revenue in four key areas:  income taxes, the tax on inherited wealth, corporate taxes, and sales taxes.

Some people in the audience worried that raising tax revenue, especially on wealthy families and large corporations, would cause many wealthy families and businesses to leave New Jersey. Not so, said Reynertson. Research shows that a certain portion — approximately 10% — will leave, but most will stay in the location that made them wealthy in the first place. “We can afford to lose 10% when we’re gaining” revenue from 90% of those who are wealthy, she said. Similarly, the switch to “combined reporting” for corporate taxes is not expected to lead to businesses leaving NJ. Every state in the Northeast already uses combined reporting, and 92% of New Jersey’s businesses are already familiar with the practice, and consider it an ordinary part of doing business, Reynertson explained.

HOW CAN WE HELP?

Not suprisingly, NJPP’s revenue-raising suggestions are unpalatable to many current state legislators. And that’s where we come in. “We really are going to have to insist that [our new governor and state legislature] solve this problem,” said Dena Mottola Jaborska, associate director of New Jersey Citizen Action. “This…is really about courage.” Elected officials will need courage to advocate economic policies that put working families, and not the wealthy, first. The public gives them this courage when we speak out, contact our legislators and show up at rallies. 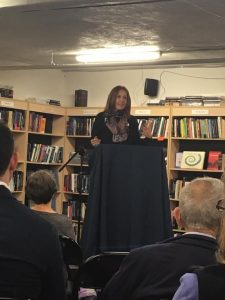 Grassroots activists needs courage too, as the road ahead is going to be hard. “We have very vested interests working against us,” said Jaborska. Wealthy corporations have a disproportionate share of power — and that is why we need as many citizens to act as possible. New Jerseyans need to hold their elected officials accountable, and pull in friends and neighbors to call, email, and meet with representatives. Organizing our friends and neighbors is as simple as one conversation at a time. STAND CNJ’s own Olga Starr described the power of talking to people about their values and concerns, the core component of STAND’s recent Voting our Values initiative.  By connecting what happens in the statehouse with peoples’ values and concerns, we can turn apathetic citizens into active ones. Engaged citizens working together can counter the influence of money on unfair, regressive tax policy. As Jaborska said, “We have to build a movement around these [tax] issues.”

To that end, New Jersey Citizen Action is urging all citizens to get in touch with the candidates for governor and state legislature and ask them if they will support the following recommendations from NJPP’s Blueprint for Economic Justice & Shared Prosperity:

You can ask candidates about these ideas through a phone call, an email, a post on their FB or Twitter page, or a conversation at a campaign event. You can even ask them via a letter-to-the-editor of your local paper. Write down their answers, then send to dena@njcitizenaction.org or to New Jersey Citizen Action, 75 Raritan Ave, Suite 200, Highland Park, NJ.

Then, stay abreast of what is going on — and what grassroots activists and citizens need to do — by signing up for email alerts from New Jersey Citizen Action, New Jersey Policy Perspective or NJ Working Families. (or you can sign up with all three!)

If you would like to watch a recording of the “Fix NJ’s Broken Tax Code” panel, you can find it here.

One Comment on “How Can We Fix NJ’s Broken Tax Code?”