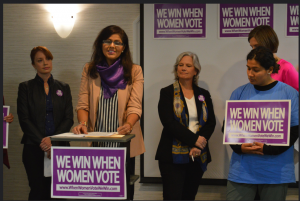 A group of women and grassroots activists held a rally today to push voter turnout among women in New Jersey’s 7th district on behalf of Democrat Tom Malinowski, who is seeking to unseat Rep. Leonard Lance (R-Clinton).

Lance, a five-term incumbent, has been under fire after getting caught on tape saying he that he tended not to believe allegations leveled by Christine Blasey Ford against then-Supreme Court nominee Brett Kavanaugh, days before Blasey Ford testified before the U.S. Senate.

“Women are the driving force behind the midterm elections and drive Leonard Lance right out of Congress we will,” said Elizabeth Meyer, the founder of Women’s March New Jersey. “Lance, who has masqueraded as moderate, yet marches in lock step with Trump, has failed to protect women from the Republican agenda intent on chiseling away our rights. His support of Brett Kavanaugh and his disregard for Dr. Blasey Ford were the match in the powder barrel. Women in CD7 are fired up and working tirelessly to usher new leadership into our district. Leonard Lance, you have 19 days to pack your bags.”

Margaret Illis of NJ 7 Forward accused Lance of failing to stand up to the Republican-controlled Congress on issues like health care, reproductive rights and equal pay.

“The blue wave is coming to the 7th congressional district, and it is female,” said Illis.