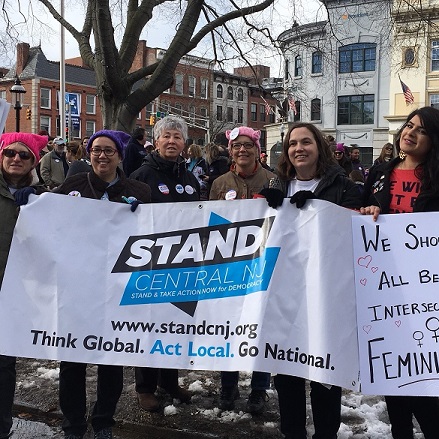 Inspired by the Women’s March ?!

2018 brings us the possibility of major change in New Jersey politics and in Congress. It’s more important than ever to join STAND and get involved in the 2018 mid-term elections–come out to our events, join us in our Vote our Values campaign, register people to vote, write postcards reminding voters about election day, and donate your time and money.

Bring your power to the polls!

STAND CNJ and progressive Americans are busy!  On Saturday,  January 20, more than a million people attended hundreds of Women’s Marches all over the country, in major cities and in smaller locales, in “blue” states, and in “red.”  STAND CNJ was a proud sponsor of the Women’s March on NJ in Morristown, for which an unprecedented 15,000 to 20,000 people showed up!

What were these marches about? To paraphrase a sign we saw in Morristown, “Ugh, where do we start?!” In other words, we marched in order to express our opposition to the Trump administration’s year-long attack on civil rights, healthcare, tax fairness, LGBTQ rights, women’s rights, the environment, government transparency, the free press, the Mueller investigation, Muslims, immigrants, and people of color. Of particular concern this weekend was the #TrumpShutdown and the White House’s sudden abandonment of a bipartisan deal to protect DACA recipients from deportation. These pressing issues are a powerful reminder of just how vital it is to take our outrage and bring it to the 2018 mid-term elections. And that was the overarching message of this year’s Women’s Marches: bring your Power to the Polls! Showing up at marches won’t make a difference unless we also show up at our polling places and get our friends and neighbors to show up too.

To that end, in 2018 national Women’s March organizers aim to launch a voter registration tour of swing states and register 1 million voters nationwide, advocate for progressive policies, and help elect women and progressive candidates in the 2018 elections. This is an exciting goal, given that 2018 will see a record-shattering number of women candidates for all kinds of offices. 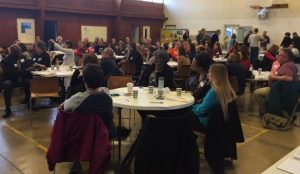 On Sunday, January 21, A Year of Resistance event reiterated the importance of the 2018 mid-terms. Organized by the Central Jersey Coalition for Justice, of which STAND CNJ is a proud member, the gathering brought local grassroots activists together to look back on the year behind us and brainstorm for the year ahead. Keynote speaker Assemblyman Reed Gusciora (D-15)  kindly stepped in and saved the day after it became clear that Rep. Bonnie Watson Coleman (D-12) was stuck in DC due to the #TrumpShutdown. Assemb. Gusciora emphasized the need for progressives to focus on this year’s midterm elections, and reminded us that “we all have to work…but we really can do it and make change all across America.” Gusciora also pointed out that after a year of progressive grassroots activism, four of New Jersey’s Republican-held congressional Districts (2,3,7,and 11) are now considered vulnerable! Said Gusciora, “I hope each of you will adopt one of those districts and help them out…and stay involved until November!” 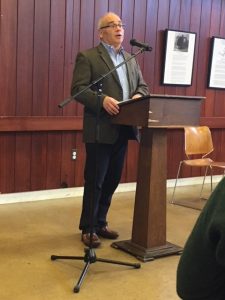 In addition to this year’s congressional elections, there is also much that can finally be done at the state level here in New Jersey. With new governor Phil Murphy, Gusciora sees an opportunity to undo the damaging policies of the Christie administration, such as Christie’s 2016 veto of legislation that would have continued the Urban Economic Zone program. Also, New Jersey may finally be able to pass progressive legislation and actually get it signed into law! Gusciora spoke at length about the possibility of legalizing marijuana, which would bring in much-needed revenues and help to undo the school-to-prison pipeline.

So as we said above, 2018 brings us the possibility of major change in New Jersey politics and in Congress. It’s more important than ever to regularly contact our governor and your state legislators. And this year, make a resolution to get involved in the 2018 mid-term elections: register people to vote, phone bank for a candidate, write postcards reminding voters about election day, donate money, host a fundraising dinner. No matter how little time or money you have, there are still ways for you to help increase voter turnout this November and elect progressive candidates. Bring your power to the polls!