Press Conference Regarding the Use of Force by Police

Join us Thursday March 7, 2019 in room 103 across from the Senate Chambers at the NJ Statehouse as Salvation and Social Justice and the NJ Black Multi-faith Alliance, in conjunction with the State Conference NAACP, NJ Black Legislative Caucus, and various organizations from the United Black Agenda will hold a press conference to announce community hearings regarding the disturbing findings in the Force Report (https://force.nj.com).

According to an analysis of five years of police use-of-force data from every department in the state Black people were three times more likely to be punched, kicked, pepper-sprayed, struck with a baton and attacked by a dog in police use of force situations and more than twice as likely to be shot. Very few departments analyze racial profiling. Of the more than 4,600 uses of force against people under 18, slightly more than half the subjects were Black, though they represent only 14.5 percent of the child population in New Jersey.

We will discuss eliminating the shameful disproportionate use of force against African American people by New Jersey law enforcement by: 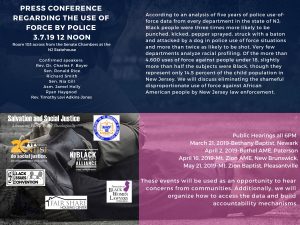