UPDATE, 3/27/2018:  Thank you to everyone who made phone calls or sent emails. The Senate State Government Committee voted to advance these bills! They now head to the state Senate Budget & Appropriations Committee. Stay tuned for the next action step! 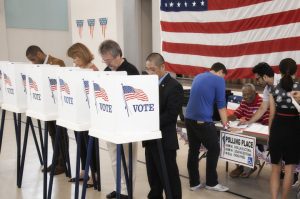 With an important mid-term election coming up in November, and the primary election just 3 months away, New Jersey needs to take steps now to make voting as fair and accessible as possible. Three bills will be considered on Monday, March 26th, that can help our state take these steps:

Contact committee chair Sen. James Beach before 11am on Monday, 3/26, and urge him to support automatic voter registration and early voting. Leave a voicemail at 856-429-1572, or send an email to SenBeach@njleg.org