The FCC wants to get rid of net neutrality rules that keep internet service providers (ISPs) from blocking or giving preferential treatment to particular websites. Americans have UNTIL JULY 17TH to make a public comment to the FCC in support of net neutrality. Leave an express comment here or leave a longer comment with attached documents here, using the proceeding number 17-108 (Restoring Internet Freedom). LET’S FLOOD THE FCC WITH PUBLIC SUPPORT FOR NET NEUTRALITY! 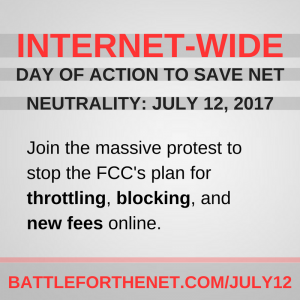 What else can you do for net neutrality? Raise awareness on social media and mobilize more public comments by sharing a graphic from here.