UPDATE, 4/17/2018: Thank you to everyone who called and emailed — these 6 bills have all been successfully moved forward out of the Law & Public Safety Committee! Stay tuned for next steps. In the meantime, be sure your state senator knows that you support these common sense bills!

Six common sense gun safety reform bills have passed in the state Assembly, and are now working their way through the state Senate. On Monday morning, April 16th, the Senate Law & Public Safety Committee will consider these bills. Call or email the committee chair, Sen. Linda Greenstein, before Monday morning to voice your support for common sense gun safety reform!  609-395-9911 or SenGreenstein@njleg.org

The Parkland shooting, and the many student protests and March for Our Lives events that have followed, continue to inspire momentum for gun 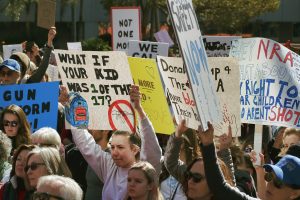 safety reform. New Jersey’s state Assembly has already responded by passing 6 common sense gun safety reform bills last month. Now the bills need to pass in the state Senate. But first, they have to pass out of the Senate Law & Public Safety Committee, which will consider them on Monday, April 16th. Contact the chair of the committee, Sen. Linda Greenstein (D-14) this weekend at 609-395-9911 or SenGreenstein@njleg.org, and tell her to support these common sense bills:

Not sure what to say if you’re not Sen. Greenstein’s constituent? Try this:  “I’m calling/writing because you’re the chair of my state Senate’s Law and Public Safety Committee.”