As we begin our blog series on rights and services for individuals with disabilities, let’s take a look at two items that would have major impact – one on the state level, and one national.

First – a seemingly innocuous set of fiscal rules introduced by the NJ DOE could have a disastrous impact on private special education schools in the state that serve 11,000 of the state’s most complex students, whose needs cannot be met within district public schools. The NJDOE  proposed more than 80 pages of new accounting rules that will devastate these schools, and make it very hard for them to operate. Some schools may be forced to close. The rules affect areas such as pension, healthcare, travel, hiring and staff training, tuition-setting, debt, and audits, to name a few. These rules will directly affect services to children. Here is a summary sheet of the changes and the effects they would have:

Many advocacy organizations have expressed strong opposition to these regulations, including ASAH, Autism New Jersey, The Alliance for the Betterment of Citizens with Disabilities, The Arc of NJ, and the United Way of Central NJ. Calls for action can be found here:

On the federal level, we are keeping an eye on GOP proposals to replace the current Medicaid funding system with block grants to states, essentially shifting more costs to states and leaving states with a lot of discretion on how to spend their limited funds. This could be disastrous for people with disabilities, who frequently rely on Medicaid for their medical care; for many, it would limit their treatment options – for others, cuts to Medicaid would mean that they could no longer live independently. A good explanation can be found here:

Welcome to STAND’s education blog! With so many policy proposals and changes coming down at both the federal and state levels, parents, educators and advocates have been left with their heads spinning. Our aim is to provide regular round-ups of education issues of relevance and importance to NJ residents.

As of today, it appears that H.R. 610 (the bill that replaces the 1965 education act-recently reauthorized as ESSA with a voucher bill) is dead in committee, as is the bill to get rid of Department of Education. Both bills can be re-introduced at a future session of Congress, but for now they are dead. Let’s keep in mind, though, that the GOP probably did not expect these bills to pass in their current form; rather, they introduced them as a gateway to undoing public education. We should expect to see more legislation of this sort coming down the pike, and will need to actively oppose it.

We are at an interesting juncture with education policy at the state level, as outgoing governor has consistently Christie has consistently supported charters, Common Core, and broad use of the PARCC standardized test, and acted in opposition to the NJEA.  Opposition to his policies have been widespread as public education advocates have vocally opposed the spread of charter schools, particularly into high-performing school districts, and the expansion of the uses of PARCC, especially as a graduation requirement.

Christie’s final budget, presented on February 28th, did not include his proposed “fairness formula” which would equalize school aid across all districts, rather than give additional aid to districts with higher levels of poverty and homes where English isn’t the main language as mandated by the School Funding Reform Act of 2008. Although “fairness formula” is effectively dead, Christie is insisting that a compromise on school aid must be accomplished within 100 days, and has suggested that if the Democratic legislature won’t work with him, “if forced, (he) will act alone”. Decreasing funding for already struggling schools in poverty-stricken and under-resourced districts would be disastrous for already vulnerable students.

In the meantime, the controversy over the expansion of PARCC test usage continues. The state Board of Education in August of 2016 approved the PARCC exams as the state’s new graduation assessment, and students will now be required pass both the Algebra I and 10th-grade English tests beginning with the Class of 2021. Opponents of the requirement site many practical and legal issues, and argue that it is an effort by Chris Christie to damage the reputation of public schools with a test that misleadingly expands the failure rate, further opening the door to more charter and private schools.  Lawmakers have introduced a measure to try to repeal the requirement by declaring the it inconsistent with legislative intent, and in mid February, Assembly Education Committee advanced the measure. More information on the PARCC graduation requirement can be found here:

All eyes will be on the 2017 gubernatorial candidates, who will hopefully share details on their plans for school funding, special education, charter schools, standardized testing, and how the state would handle policy made at the federal level. 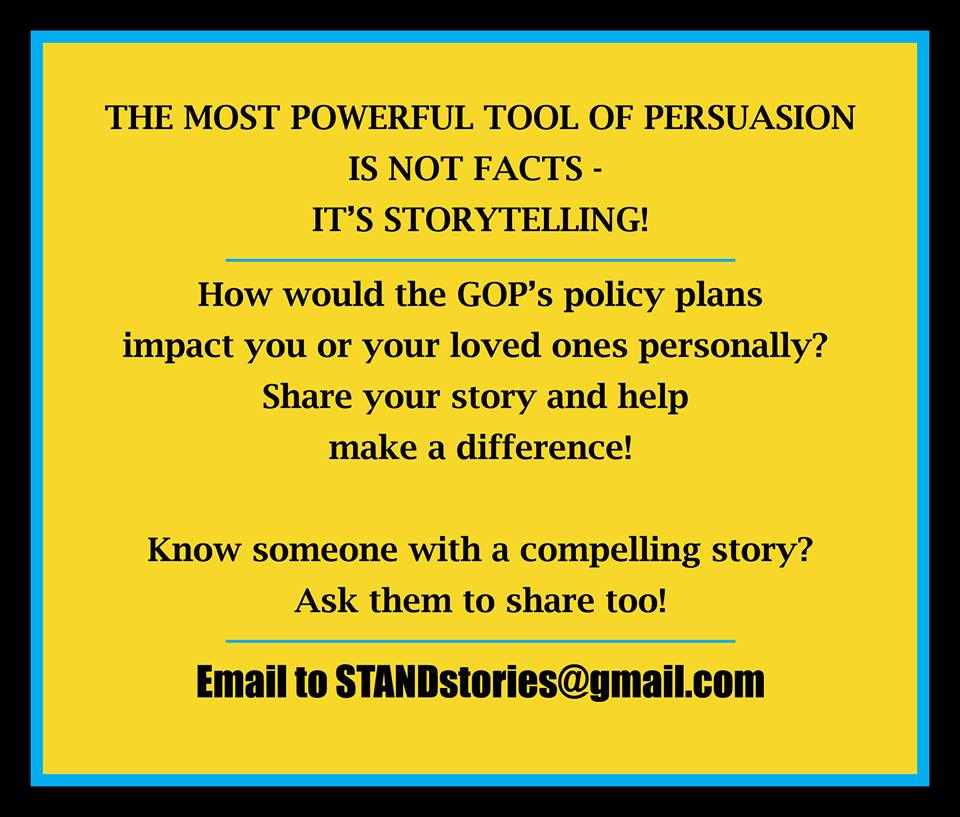 The most powerful tool of persuasion is not facts.
It is storytelling.

How would the GOP’s policy plans impact you or your loved ones personally? We are searching for people to share their stories which will help make a difference.

If you have a compelling story, or know someone who has one, send an email to us at STANDstories@gmail.com to tell us how you’ve been impacted.