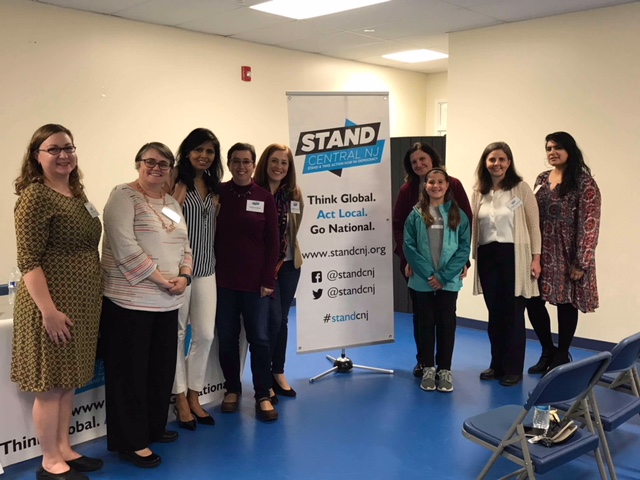 Threats at the federal level

At the forefront of everyone’s mind was the impending vote on Brett Kavanaugh’s nomination to the Supreme Court. Because he would be replacing retiring Justice Anthony Kennedy, a reliable fifth vote for protecting access to abortion, “we have serious concerns about what he’ll do if he’s on the Supreme Court,” said Jean LoCicero, deputy legal director of ACLU-NJ. When asked whether he would vote to overturn Roe v. Wade, Kavanaugh has given vague answers. (What is known for sure, however, is that he was nominated by a president who pledged to only appoint pro-life judges to the Supreme Court, and who chose candidates from a list pre-approved by Leonard Leo of the Federalist Society, a man and organization known for its opposition to abortion rights.) In a previous ruling, and in an email reviewed by senators, Kavanaugh’s record suggests that he will not rule in favor of access to abortion rights should the issue come before the Supreme Court. America could soon find itself with a 5-4 Supreme Court majority directly contradicting the 7 out of 10 Americans who believe abortion should remain legal. This would have a “profound impact on women and their families,” warned LoCicero. Women’s autonomy, health and financial futures are on the line.

Though some states, like New Jersey, have no restrictions on abortion, and would weather the loss of Roe v. Wade without negative consequences, that is far from true for the country as a whole. State level abortion restrictions are already very real in many states, according to LoCicero. More than 300 laws restricting access are already on the books across the US. Five or six states have restricted access so much that there is only 1 abortion clinic in the entire state, and 27 cities are in ‘abortion deserts‘, areas that are located 100 miles or more from the nearest clinic. Additionally, 6 states have already passed ‘trigger laws‘ that will immediately go into effect and ban or restrict abortion if Roe v. Wade is overturned. As LoCicero said, “the trends are not good.” The next Supreme Court justice will have life-altering consequences on women’s access to the reproductive health care they need.

Two other major issues threaten women’s health care access at the federal level: a proposed change to Title X that would enact an anti-abortion gag rule on women’s health clinics, and possible forthcoming attacks on the ACA, Medicare and Medicaid.

Earlier this year, the Trump administration proposed strict new rules for Title X family planning funding. The new rules would not only deny federal funding to any clinic that provides abortion, but would also bar clinics receiving Title X funding from even discussing abortion or referring patients to other providers who offer abortion services. Women’s health advocates, like Casey Olesko of New Jersey’s Planned Parenthood Action Fund, object to this new anti-abortion gag rule. Olesko worries that New Jersey’s Planned Parenthood clinics might have to close some clinics due to funding cuts caused by the gag rule. Gov. Phil Murphy and state Attorney General Gurbir Grewal are also concerned. Grewal joined a coalition of 11 state attorneys general opposing the new rule; Gov. Murphy hopes to provide some state funding to offset gag-rule related funding losses. However, Elizabeth Coulter, from the state Department of Health’s Office of Women’s Health, warns that state funds cannot make up for all of these losses. Because of New Jersey’s dire budget problems, there is not enough money to do so.

The public comment period for the new gag rule has now passed, but not before Planned Parenthood and other women’s health advocates led a campaign encouraging people to submit public comments in opposition to the proposed rule. Says Olesko, “we generated an historic number of comments across the country,” more than 6,000 in New Jersey alone and some 200,000 nationwide. The Department of Health and Human Services is currently reviewing and responding to each comment, causing a delay in the gag rule’s implementation. However, the rule is expected to eventually go into effect, though the exact timing is not clear.

Attacks on the ACA, Medicaid, and Medicare

Despite being the law for eight years, the ACA is still vulnerable to attacks from the right, says Howard. Dena Mottola Jaborska, of NJ Citizen Action, agrees. On Sunday, Jaborska reviewed the ways the Trump administration has attempted to sabotage the law’s success in the last two years (e.g. shortening the enrollment period, repealing the individual mandate, allowing ‘junk insurance’ plans that don’t meet the ACA’s minimum coverage requirements), and warned of threats that may be forthcoming: A legal challenge to Obamacare filed by Republican governors and state attorneys general is slowly working its way through the courts, and could soon end up before the Supreme Court. Additionally, if Republicans hang onto control of Congress after November’s mid-term elections, they are likely to attempt another repeal of the ACA.

Safety net programs like Medicaid and Medicare are vulnerable as well. As a result of the Republican tax cut bill passed in December 2017, the US is grappling with a deficit ballooning by trillions of dollars. The GOP is expected to respond by proposing cuts and caps to programs like Medicaid and Medicare, which will reduce access to care for millions of Americans. Republicans are even attempting “tax reform 2.0” this week, hoping to pass even more irresponsible tax cuts that will only make our deficit problems worse, granting more cover to politicians on the right to propose cuts to Medicare, Medicaid, food stamps, and other important social safety net programs. “We have to save these programs,” says Jaborska. “We can’t let these short-sighted cuts harm these programs.” “These programs aren’t the problem,” agrees Howard. “You [Congress] created the problem!”

How can New Jersey weather this storm?

Despite all these federal-level threats, New Jersey is well-positioned to deal with them. Since taking office in January, Gov. Murphy has taken several key steps that will help us weather the storm. He began his administration by restoring funding to family planning clinics, which suffered for eight years after former Gov. Chris Christie had pulled funding. In May, Gov. Murphy signed into law 2 bills that will help to shore up the state’s insurance market in the face of the administration’s sabotage efforts. He has also expanded Medicaid again, making it possible for more pregnant women to be covered. As the implementation of the anti-abortion gag rule nears, Murphy is “interested in protecting women’s access to care, making sure care continues, no matter what” happens at the federal level, says Coulter, from the NJ Department of Health. Though New Jersey does not have the funds to make up for all Title X funding losses, as mentioned above, the state hopes to minimize the damage.

However, there are other issues negatively affecting women’s health in New Jersey, according to Sunday’s panelists. LoCicero is concerned that New Jersey’s schools sometimes do not provide the comprehensive sex education that is mandated by the state. Abstinence-only education occasionally slips through the cracks when teachers invite guest speakers from groups offering programs about “sexual risk avoidance”, the new term for abstinence-only education. Our teens can end up with very little useful information about birth control.

Access to birth control is also becoming an issue at religious hospitals in New Jersey, adds LoCicero and Coulter. Citing religious affiliation, many of these hospitals refuse to provide women with the full range of reproductive health care and contraception that is available, a situation known as “religious refusals”. The problem grows when non-religious and religious hospitals consolidate. Religious hospitals will not perform abortions, of course, but they also refuse to perform tubal ligations or give women IUDs or implants immediately after giving birth. This can lead to child-spacing of less than 18 months, which increases the risk of maternal and infant mortality and morbidity. Coulter’s work at the Department of Health has found that there is some level of correlation between higher mortality/morbidity rates and religious hospitals in the area.

New Jersey’s maternal and infant mortality rates in general are of major concern. Our state is leading in many areas, “but unfortunately we are not leading in infant and maternal measures,” says Howard. Maternal mortality rates are high compared to other states in the US, perhaps a result of New Jersey’s very high C-section rate, explained Coulter. (C-sections increase the risk of life-threatening conditions such as hemorrhages and embolisms). In New Jersey, 36 out of every 100,000 pregnancies or births end in a mother’s death, compared to a national average of 20 out of 100,000. Additionally, there are “astounding” racial disparities in maternal and infant mortality. Black mothers die nearly four times as often as white mothers (46.5 vs. 12.8 of 100,000 for black and white mothers, respectively). The maternal mortality rate for Hispanic mothers is three times as high as white mothers’. While New Jersey’s infant mortality rates have been declining overall to below the national average, our state has one of the largest racial disparities in infant mortality in the country: 3 per 1000 live births for white babies compared to 9.7 for black babies. Researchers at the Department of Health are working hard to understand and reduce these disparities. Lack of education, “care deserts”, and the effects of institutional racism all contribute to the problems, says Coulter. Care providers have also been shown to have implicit bias that affects how seriously they consider the medical complaints of patients of color. The Legislative Black Caucus is currently working on legislation that would address these startling disparities and lead to reductions.

What can you do?

Sunday’s panelists recommended several actions you can take regarding the various issues affecting women’s health at the federal and state level.

If you missed this event, and would like to watch the FB Livestream recording, you can find it at   https://www.facebook.com/standcnj/videos/288143898683620/