After the sudden withdrawal of the US from the Paris Climate Agreement last year, statewide action to reduce greenhouse gas emissions has never been so urgent. The time to transition to renewable energy is now, and our state is finally able to do something about it!  At our April general meeting, speakers from the NJ League of Conservation Voters, ReThink Energy NJ, and Food & Water Watch NJ described how to get New Jersey off fossil fuels and onto a path towards 100% renewable energy. Then, attendees participated in our first-ever “action hour” session, writing letters to the governor, state legislators and the NJ Department of Environmental Protection. If you missed our meeting, but want to learn more about what actions you can take, text ‘Renewables’ to 797979 to learn about important upcoming events from ReThink Energy NJ, and text ‘NJOFF’ to 69866 to receive updates and alerts from Food & Water Watch NJ. 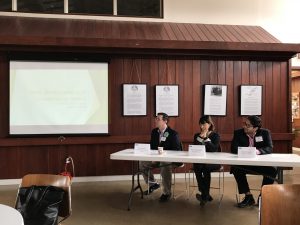 The time to transition to renewable energy is here     After eight years under the Christie Administration, New Jersey finally has an opportunity to make progress on environmental issues. Already, in the first 2 1/2 months of Gov. Murphy’s administration, “we’ve seen a whirlwind of environmental action,” according to Ed Potosnak, executive director of NJ League of Conservation Voters. And now, major legislation for renewable energy is on the horizon. “New Jersey’s on the cusp of passing one of the most aggressive and bold” plans to fight climate change in the country, says Potosnak.

In fact, New Jersey legislators have 2 such plans to choose from, both bringing the state to 100% renewable energy sources, but on different timelines. 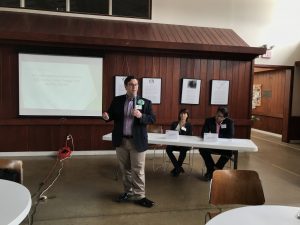 Bill A3723/S2314, supported by NJLCV and ReThink Energy NJ, would power the state with 100% renewable energy by 2050. Components of the plan include: moving to 52.5% renewables by 2030, then to 100% by 2050; a price cap that protects ratepayers from excessive charges; investment in community solar programs; and energy efficiency goals for utilities.

Food & Water Watch NJ is supporting a bolder plan, bill A1823/S1405, that would get New Jersey to 100% renewable energy by 2035. According to Junior Romero of Food & Water Watch, this more aggressive plan is necessary because “the next ten years are critical” if we want to avoid a climate tipping point. Supporters of this plan fear that if we wait until 2050 to get to 100% renewable energy, we will be passing this critical issue off to the next generation to deal with. 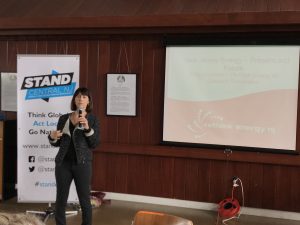 While the goal of transitioning to renewable energy may seem impossible, extensive research prepared for ReThink Energy NJ by the Institute for Energy & Environmental Research and PSE Healthy Energy has actually shown that “it’s essential, its achievable, and its affordable,” says Patty Cronheim. “It’s actually cheaper to follow a clean energy path than our current path.”  ReThink Energy NJ’s report estimates that the cumulative costs of continuing with our current energy portfolio from 2018-2030 (which unfortunately has led to a 27.6% increase in greenhouse gas emissions in 2013-2015 alone!) would cost $130,200 billion. Meanwhile, moving to 50% renewable energy sources by 2030 would cost less, at $129,800 billion.

As we consider the steps we will take to reach 100% renewable energy, Food & Water Watch’s Romero warns against ‘greenwashing’ dirty energy. Renewable energy systems should not use garbage-incineration, which is a major health concern for people who live near incineration plants. High rates of asthma have been found in these communities. The burning of animal waste or manure is also problematic. While it is a ‘renewable’ source, it is far from ‘clean’, as it affects air quality, and relies on industrial livestock production, which has many negative environmental consequences.

Romero also reminded us to make sure that our efforts bring about a “just transition.” We need to ensure that people who lose their jobs in the shrinking fossil-fuel industry have access to job training programs for the renewable energy industry. We also need to make sure that the communities who have borne the brunt of our current energy policy — typically low-income communities and people of color who live near energy plants, and whose health suffers greatly as a result — have a seat at the table when renewable energy transition plans are made, and have access to the jobs created by that transition.

The state Assembly and Senate are voting this afternoon, 4/12 on A3723/S2314, the 100% renewables by 2050 plan. If you would like your state legislators to support this bill, or to keep pushing for 100% renewables by 2035 (A1823/S1405), make your opinion known Thursday morning, 4/12! You can find out who your state legislators are here. Click on their names to see their contact information.

Weaning off of fossil fuel energy sources requires putting an end to new construction of fossil-fuel energy infrastructure. To that end, environmental organizations and concerned residents are fighting to stop the construction of new pipelines in our state, which is already home to 1,500 miles of major interstate pipelines carrying upwards of 70% fracked gas, according to Cronheim of ReThink Energy NJ. In fact, experts argue that there is no need for more pipeline capacity, and in fact, New Jersey is too reliant on natural gas for energy, leaving us vulnerable to price fluctuations. Cronheim sees proposed new pipeline construction as “the last gasp of the oil & gas industy to get us hooked on natural gas for the next 30 to 40 years.”

Central Jersey residents are currently fighting to stop 2 proposed pipeline projects, the PennEast pipeline and the Williams-Transco NESE project, which includes a gas compressor station to be built in Franklin Township.

Local residents and advocacy organizations have been working for several years to stop construction of the proposed Penn East pipeline. The route of the pipeline would cross 67 bodies of water in NJ, some of which are considered “exceptional” in ecological, recreational or water supply significance. The pipeline route would cross the Delaware River, source of drinking water for millions of people in the region. Many are concerned about the possibility of these waterways being catastrophically polluted by an pipeline failure. Pipeline accidents are on the rise, Cronheim reports, due to aging pipes already in the ground, and rushed construction of new pipelines. Local residents are also nervous, as the blast zone of the proposed pipeline route is close to many homes and schools.

The company behind Penn East has recently received a certificate of approval from the Federal Energy Regulatory Commission (FERC), but the fight is not over yet! Before any construction can begin, the pipeline must be approved by the NJ Department of Environmental Protection. It is crucial to contact the NJDEP Commissioner now.  Urge her to reject this unneeded pipeline and fully enforce our state’s rules protecting our water, land and air. You can write to her at: DEP Commissioner Catherine McCabe, 401 E. State Street, 7th Floor, East Wing, Trenton, NJ 08625-0402. You can find information about other actions here.

Similar concerns are motivating residents to stop the construction of the proposed NESE project and compressor station in Frankling Township. The proposed pipeline route would cross the Raritan Bay, and run alongside the Sandy Hook National Recreation Area. It would also be built near a toxic Superfund site. This has created concerns that digging in the area would disperse all kinds of toxic pollutants, says Romero of Food & Water Watch.

The proposed gas compressor station in Franklin Township is a major concern, as the intended location is very close to housing developments. Local residents are worried about the risk of deadly gas leaks or explosions, as well as all the negative health risks associated with compressor stations. Additional, the toxic gas plume that a compressor station produces would travel far beyond the immediate vicinity of the compressor station, threatening the wider region.

The NESE project is still being considered by FERC. It is urgent that as many as people as possible sign up to become intervenors and submit public comments to FERC opposing the project. Several important events are coming up for concerned central Jerseyans. An action session is scheduled for April 18th in Somerset, where you can learn how to become an intervenor and make effective public comments. Also, FERC will be holding 2 public hearings in the coming weeks, one on April 25th and another on May 2nd. It is vital that people show up to these meetings and make comments! To learn more, go here. 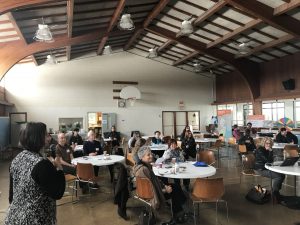 We have a lot of work ahead of us to transition our state to 100% renewable energy and stop the construction of new pipelines. But it can be done: “We have so much potential with offshore wind and solar in New Jersey,” says Romero. The critical thing is for local residents and organizations to join together. Cronheim and Potosnak emphasize the importance of working together and showing up at rallies, meetings and other events. As Potosnak said, “If we don’t speak up, [officials and legislators] move on to the person who’s squeaking.”

Want to make some noise about this crucial issue at this critical time? Sign up for alerts from our guests organizations and stay involved!