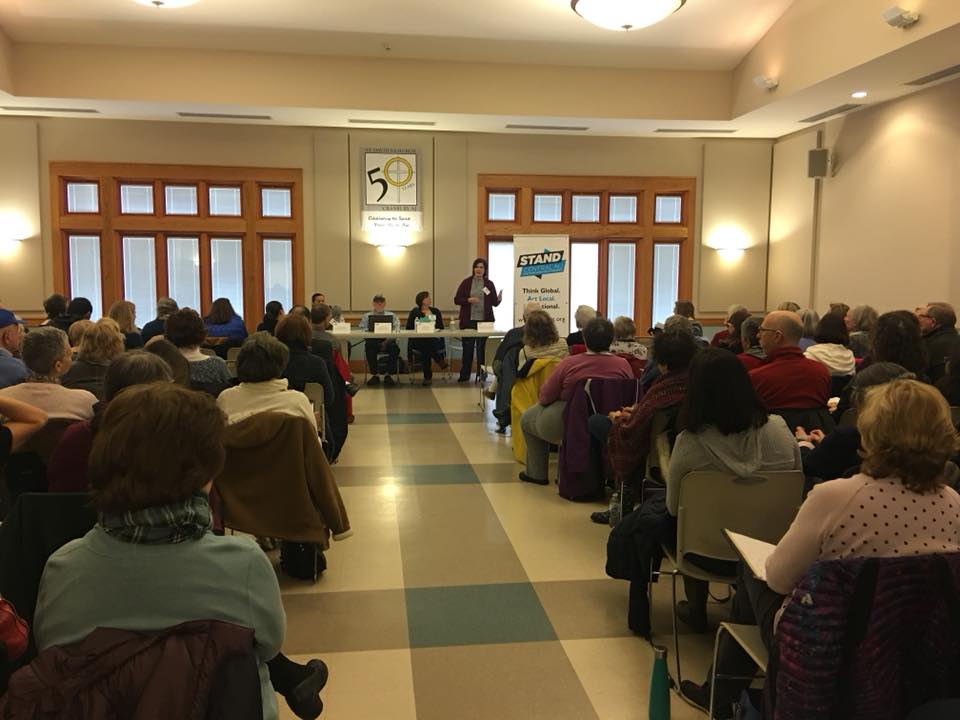 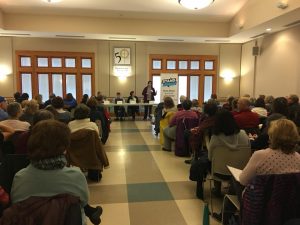 Last year, hundreds of new central Jersey grassroots activists (such as members of STAND CNJ!) learned how to mobilize people for marches and town halls, and flood congressional offices with constituent feedback. In 2018, we find ourselves with a slightly different, but absolutely vital task of mobilizing voters to show up at the polls for November’s mid-term elections. This is likely the most important mid-term election most of us will ever take part in. And it is especially important in New Jersey, where we have the opportunity to elect more progressive candidates in at least 4, and maybe even 5, congressional districts (NJ’s 2nd, 3rd, 7th, & 11th districts, and maybe even the 4th)! Such a feat would go a long way to making Congress as a whole more progressive. 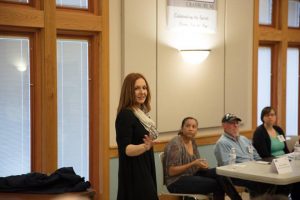 Central Jersey’s grassroots community senses the responsibility before us. As STAND CNJ vice president Olga Starr said, “Really, what it comes down to is that each and every one of us has to do something.” 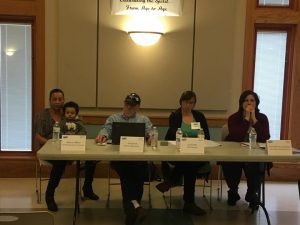 What is that ‘something’? On February 25th, STAND CNJ and Indivisible Cranbury invited 4 experienced community organizers to our monthly meeting to help us figure it out: Dena Mottola Jaborska, associate director of NJ Citizen Action; Analilia Mejia, executive director of NJ Working Families Alliance; Liz Glynn of NJ 7 Forward; and Jim Girvan, of NJ 7 Forward and the People’s Motorcade. Together, our 4 speakers drew us a road map for electoral work in 2018 that emphasizes coordinating among groups, broadening the community of voters, and micro-targeting our messages to voters.

One of the biggest challenges grassroots groups face is “biting off more than we can chew on our own,” says Mejia, of NJ Working Families. Her organization is focusing this year on how to avoid duplicating efforts, and instead coordinate with other groups for maximum effect. Glynn echoed this sentiment. Working in NJ’s 7th congressional district, home to more than 50 community groups, her organization (NJ 7 Forward) is currently working to educate group leaders on organizing strategies, and make sure that each group knows what to do. “It’s an ongoing challenge,” says Glynn. She sees a role in this group effort not only for Indivisible and other broad progressive groups, but also for single-issue advocacy groups. For example, environmental organizations can work effectively to educate voters about the environmental consequences of this election, and mobilize voters who care about the environment to show up at the polls on election day. At the same time, campaigns for specific candidates can also help increase voter turnout by mobilizing voters who are excited about the candidate. 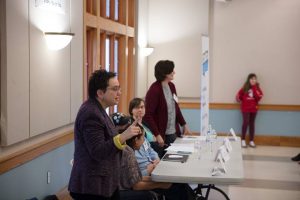 STAND CNJ President Karen Haskin encourages all central Jersey grassroots groups to share your events with us at standcnj@gmail.com, for publishing on our FB pages and website, so that we can help keep the wide variety of groups in our region connected. (You can also find a list of local groups in our directory).

BROADENING THE COMMUNITY OF VOTERS

Voting in a better Congress in 2018 requires us to reach beyond the members of our own groups and out to the wider central Jersey community. “We need to think about how we can revitalize our democracy,” says Jaborska, of NJ Citizen Action, and go “beyond just taking seats back and think about how we can make our political system more open and more responsive to more people.”

This is a challenge because many potential voters are not aware of or interested in November’s mid-term elections. “There’s still a lot of people outside of our world who aren’t really doing the ‘resistance’ day in and day out,” according to Glynn. Voter turnout in the US is generally low nowadays, and turn-out for ‘off-year’ elections is even lower (often in the range of only 20-40% of registered voters). Grassroots groups who want to help get out the vote need to make sure that New Jerseyans know why this mid-term election is so important. 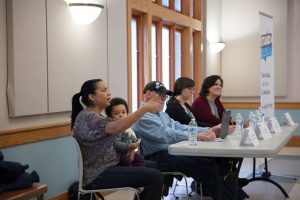 We also need to consider a voter outreach strategy that is broad enough to engage with swing voters and base voters.  Mejia believes its a mistake for progressives to neglect their base while focusing most of their efforts on white working class swing voters, and forcing candidates to avoid certain important issues as a result. Instead, base voters need to be more deeply engaged too, and not just in the two days before an election in a last-minute, door-knocking GOTV effort. “Unless we talk to base voters and give them a reason to go out and vote, they’re going to stay home,” warns Mejia.

Grassroots groups also need to avoid the mistake Hillary Clinton’s campaign made in 2016 by not sufficiently reaching out to communities of color, Jaborska reminds us. It is vital that new resistance groups connect up with organizations led by people of color, as well as recruit people of color for leadership positions in our own groups, says Jim Girvan, of NJ 7 Forward and the People’s Motorcade. Mejia seconds that, and described a trend she has noticed in her extensive organizing background: when there are more women and people of color in the leadership of a group, there are more women and people of color involved in that group. Mejia urges grassroots groups to be intentional about this often-difficult effort: “We have to talk in a way that expands the issues…Are we going to say ‘black lives matter’? Are we going to talk about issues that disproportionately affect people of color? Its okay to feel uncomfortable [with the steps we need to take to deal with the lack of diversity in the ‘resistance’] but its not okay to ignore that we’re not as diverse as we should be.”

Along with communities of color, young voters do not often get sufficient attention in voter outreach and turnout efforts. According to Glynn, young voters tend to have only a vague awareness that an election is approaching, so “its important to engage them early.” She recommends issue-oriented outreach strategies for young voters, who often get excited and mobilized to vote because they care about the environment, gun safety, healthcare or affordable college tuition. “They’re definitely worried about their future,” says Glynn. Its also important to recruit young volunteers to reach out to other young voters. For example, instead of tabling at a college campus with middle-aged or retired volunteers, ask college-age volunteers (and especially students at that very campus) to work at the table, register other new, young voters, and talk to them about issues.

Jim Girvan sees micro-targeting and messaging as two of the biggest challenges for grassroots work on the 2018 mid-term elections. Groups need to become more skilled in identifying their target audience and crafting micro-targeted messages for specific audiences. In order to accomplish this, “we know that its important to get the best 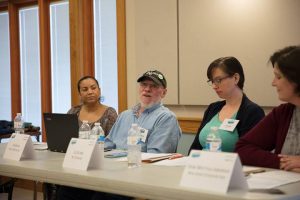 possible understanding of the electorate as we can,” says Girvan. Mejia adds, “We have to talk to people about the issues that are motivating them to vote.” To help uncover these motivating concerns, Girvan is leading a massive project for NJ 7 Forward, gathering voter turnout data from multiple election cycles. They’re breaking down this data by district (the 7th), municipality, and even precinct, then going door-to-door to talk with voters about their concerns. The patterns they find will help NJ 7 Forward plan its ground game for the 2018 and 2020 elections.

MEANWHILE, BACK IN WASHINGTON……

At the same time as grassroots groups consider voter turnout strategies, we also need to remember that “defensive issue work isn’t going away,” as Jaborska reminds us. We still are faced with daily attacks on progressive values at the federal level. But with the end of the Christie administration, we finally are in a situation where we can do a lot at the state level. Mejia wants everyone to know about the NJ Legislative Resistance Caucus, which formed last year and will soon resume its efforts to create “firewalls” to protect our state from damaging rollbacks by the federal government. She also recommends spending time every week catching up on what is happening at the Statehouse in Trenton. Suggested news sites are Politico’s NJ Playbook, Observer’s New Jersey Politics page, NJ Spotlight, and InsiderNJ. And don’t forget to urge your state legislators and local officials to counter damaging developments at the federal level with state and local actions! Check out our calls to action on Facebook or on our website.

A huge thank you to our guest speakers, volunteers, attendees, Indivisible Cranbury, and St. David’s Episcopal Church for making this meeting a success!