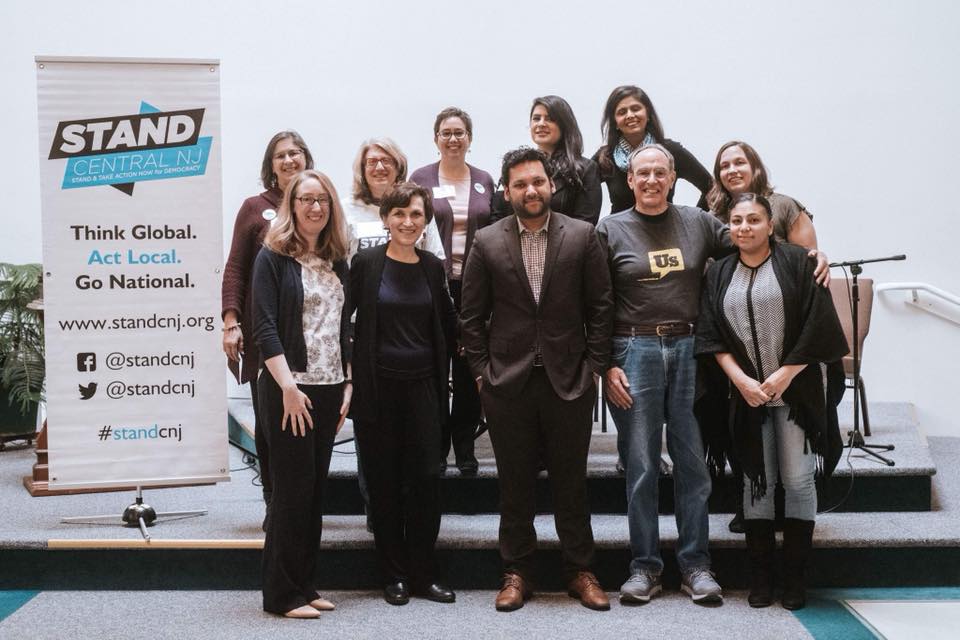 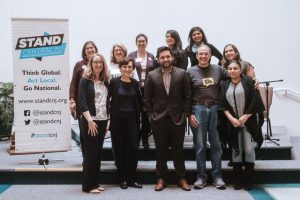 The League of Women Voters of New Jersey has just launched a  campaign to reform the state’s redistricting process, according to Jesse Burns, executive director of the League. The Fair Districts NJ initiative seeks to create an independent redistricting commission like those already in place in 6 states (Alaska, Arizona, California, Idaho, Montana and Washington). Independent commissions prevent elected officials from directly influencing how district maps are drawn, thereby 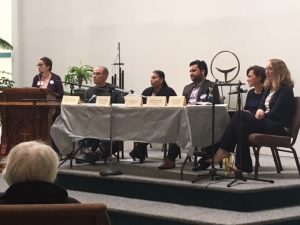 preventing gerrymandering. Instead, citizens would apply for a spot on the commission (currently in New Jersey, commission members are chosen by the chairs of the state Democratic and Republican parties). The result is more fair and competitive elections. This in turn “restores public faith in democracy and helps to increase voter turnout” because “people have more faith that their vote in their district counts,” says Burns.

The process for creating an independent redistricting commission in New Jersey has to begin in the state legislature, where a majority of lawmakers must approve a ballot question. Then the issue is turned to voters, who will be asked whether the state should change its redistricting process and establish an independent citizen commission. The League of Women Voters has already begun collecting signatures on a petition to pressure legislators to act.

Meanwhile, the Central New Jersey chapter of Represent.Us is busy advocating for the American Anti-Corruption Act, which also calls for independent redistricting and other reforms. Since 2013, team leader David Goodman and his chapter have helped 6 towns in Mercer County pass resolutions calling on the state legislature to enact the American Anti-Corruption Act or other legislation that would support its goals: fixing our broken election system through independent redistricting, open primaries and ranked-choice voting; ending the influence of secret money by requiring public disclosure of political donations; and reining in the influence of lobbyists. Says Goodman, “the issue that we’re talking about is not a Democratic issue or a Republican issue or a Green issue. It’s an American issue.”

The Central New Jersey chapter takes a very local approach to making change. “What we’re focusing on is what we can do at the grassroots level,” Goodman said. Old-fashioned methods like writing letters-to-the-editor and showing up at meetings enabled them to succeed in passing the first Anti-Corruption Resolution in the country, in Princeton. Since then, Ewing, Lawrence, South Brunswick, West Windsor and Cranbury have approved similar resolutions. Now, the state legislature is considering two bills (A1524 and A1957) that would, according to Goodman, “take major steps” towards the goals of the Anti-Corruption Act. After eight years of the Christie administration, Goodman feels that “we have a real chance in succeeding this year in shedding light on dark money” in New Jersey. Contact your state legislators to share your support for the Anti-Corruption Act, A1524 and A1957. You can learn more and get involved here.

The Good Government Coalition of NJ

Panelist Julia Sass Rubin represented the new grassroots organization Good Government Coalition of New Jersey (GGCNJ), another group seeking “to ensure that all branches of government, at the state and local levels, work on behalf of all of us,” and not just power brokers and party bosses “who shape decisions in backroom deals,” according to their website. Rubin discussed the levers of power available to party bosses: choosing who will run for which position, doling out money and foot-soldiers for campaigns, influencing legislative committee assignments, and influencing appointments to New Jersey’s many boards and commissions. One way to counter these powers is to reform the nomination process for these appointments, or even turn appointed positions into elected ones. (In many states, for example, the Attorney General is elected by voters, not appointed by the governor).

Alongside this goal, GGCNJ is also researching whether changes to ballot design might lead to more fair elections. In most of New Jersey, ballots list candidates by party, with Democratic and Republican candidates dominating one side while various third-party candidates are less obvious on the other side of the ballot. In primaries, candidates want to be the first person listed on the ballot. The location of a candidate’s name on a ballot “has an overwhelming impact on who gets elected,” according to Rubin. GGCNJ is “trying to dig down and understand how much of [ballot design] is statutory” and how much is not. “County clerks have tremendous discretion as to ballot design,” Rubin said, but no one really knows why ballots in all but 3 counties group candidates by party line, and why those other 3 counties have grouped them differently (e.g. by the position they’re running for).

Restoring the right to vote to people with criminal convictions

While GGCNJ is working to improve ballots, the ACLU of New Jersey is trying to make ballots available again to disenfranchised citizens, specifically individuals with criminal convictions. According to executive director Amol Sinha, 6 million people across the country have lost the right to vote because of a criminal conviction. This is a huge number — consider that a state of 6 million people would have 10 electoral votes! In New Jersey, people who are incarcerated 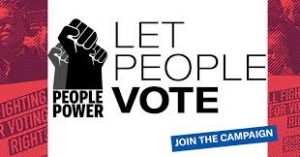 cannot vote. In addition, people on parole or probation are not allowed to vote, despite being judged safe enough, and being urged, to rejoin the community. The number of New Jerseyans affected is around 100,000. Periods of parole or probation can be quite long. For example, “if you’re sentenced to 20 years but get out after 10, you can’t vote for the 10 years you’re on parole,” explained Sinha. This has become extremely problematic because of racial disparities in the criminal justice system. New Jersey has the nation’s most extreme racial disparity in incarceration rates. Black adults are 12 times more likely to be incarcerated than white adults, and black youth are 30 times more likely to be incarcerated than white youth. Tying the right to vote to a discriminatory criminal justice system violates the 15th amendment of the Constitution. Says Sinha, “We should all be worried that the 15th Amendment says that voting rights should not be determined by one’s race.” Unfortunately in New Jersey, “we have created a system where the vast majority of people who are disenfranchised are black.”

Along with the League of Women Voters of NJ and the New Jersey Institute for Social Justice, the ACLU has begun a voting rights restoration campaign for people on parole or probation, and might possibly advocate for ending disenfranchisement of the incarcerated. Sinha noted that two states, and countries such as Canada, already protect the voting rights of prisoners. “The right to vote is fundamental and I believe it should never be lost,” he said. Protecting the voting rights of the incarcerated makes sense “not only because its a fundamental right, but also because it’s the least expensive accommodation of a constitutional right that we can provide to people who are incarcerated. People who are incarcerated are entitled to religious accommodations…They’re entitled to some first amendment rights. All of these things are accommodations that are quite expensive, and the government has to provide them because of the law. The right to vote seems to be the easiest. All you have to do is provide for an absentee ballot and deliver it to inmates. That seems to me to be a really simple accommodation that we can provide.”

Sinha believes passing a voting restoration bill is possible in New Jersey, as long as there are “strong voices in the legislature and the government overall saying that the norm should not be that we disenfranchise people. The norm should be that we promote the right to vote.” To help urge your state legislators become those strong voices, visit the ACLU’s platform www.peoplepower.org to find local groups working on this issue via the Let People Vote campaign.

Promoting the right to vote is also vital for minority and low-income communities who typically have very low voting rates. Adriana Abizadeh, executive director of the Latin-American Legal Defense & Education Fund (LALDEF), says her organization has begun to focus on voter education and registration in the Latino community of Mercer County.  They have found that Latino voters often don’t know much about elections or candidates because campaigns and organizations do not reach out to them. This leads to very low registration and turnout rates.

To fix this problem, LALDEF surveyed Latino voters and discovered that many believe their vote doesn’t matter, and many have difficulty actually getting to a polling place. As a result, LALDEF is helping people get absentee ballots and learn the many ways they can engage as citizens. According to Abizadeh, the most effective way to register Latino voters is to create “a network of businesses and clergy to do voter registration. It’s a collective effort and it should be a collective solution.” LALDEF’s efforts don’t end there. “Its easy to get someone to register to vote. Its harder to get them to turn out to vote,” she says. For the 2018 mid-terms, LALDEF is considering get-out-the-vote strategies such as text reminders, robo-calls, and providing transportation to the polls.

Our January meeting presented us with a daunting list of problems in our voting and election systems. Especially when we consider the moneyed interests creating these problems, it is easy to get discouraged. But, as David Goodman of Represent.Us reminds us: “We’ll never be able to match the wealth of powerful people, but we can outmatch them in terms of engagement.” STAND CNJ President Karen Haskin echoed this sentiment when she shared the inspiring words of Benjamin Todd Jealous last Saturday: “There are only two types of power: there’s organized people and organized money, and organized money only wins when people aren’t organized.” So, people, let’s get organized and take our power to the polls this November!

← Ready for 2018 After an Inspiring Weekend
February Meeting: Organizing Voters for the 2018 Mid-terms →