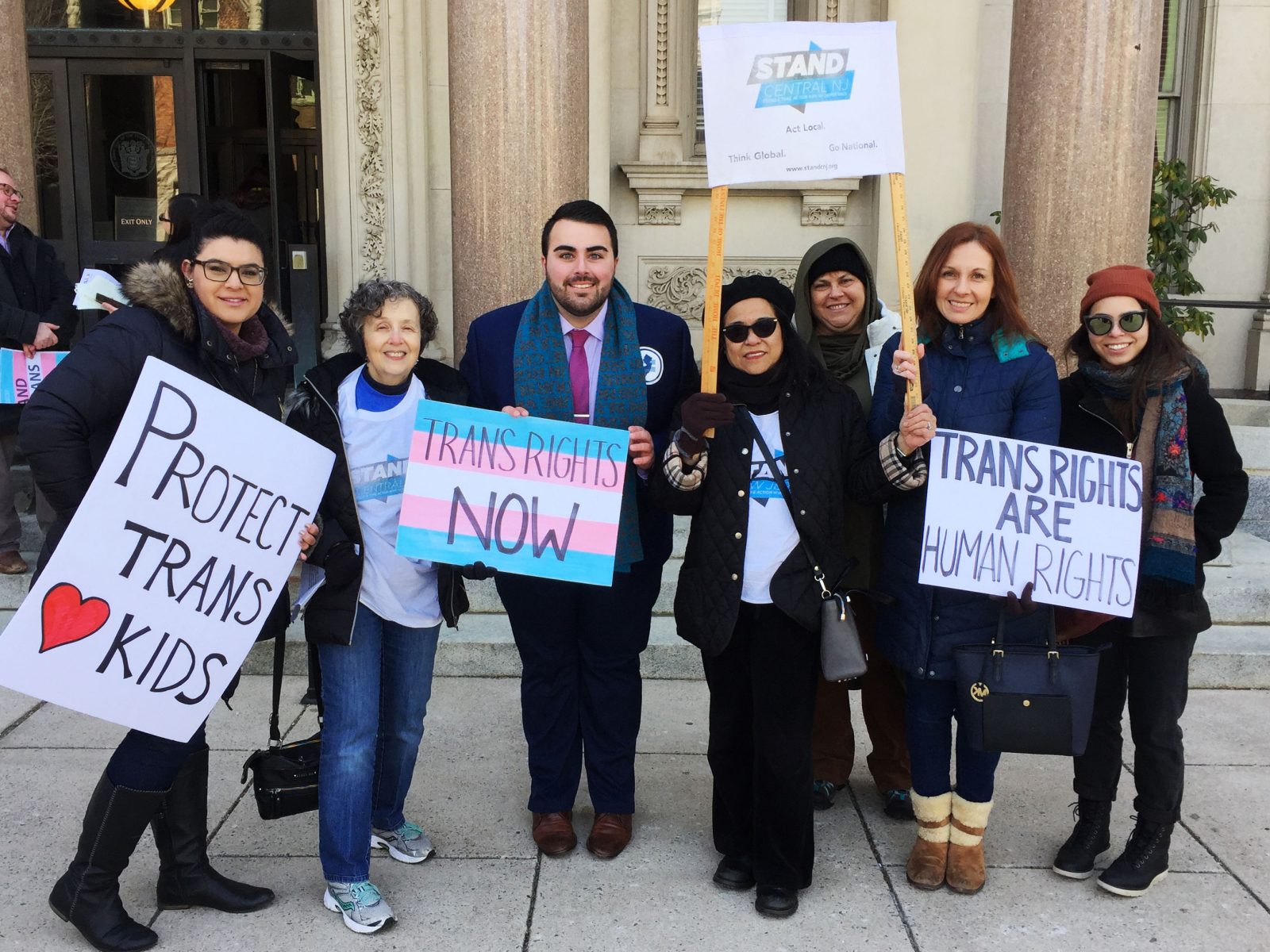 On Monday, March 13, several members of STAND CNJ braved the cold weather to attend Garden State Equality’s  (GSE) rally for Trans kids.  As a marriage equality advocate from 2009-2013, I’m no stranger to speaking from the podium on the steps of the State House, yet once again I was struck by the absurdity of having to fight for civil rights in 2017. Why are these beautiful children being harassed?? Studies are consistent in suggesting that trans youth are at a higher risk for suicide than their cis gender counterparts, due to large part to discrimination.  Why are these people in positions of power contributing to these statistics by telling them which bathroom/locker room/pronoun they are allowed to use?

All people should be able to use facilities corresponding with their identified gender or gender expression, not that which was assigned to them at birth. This is not just my opinion:  It’s the law.  New Jersey’s Law Against Discrimination  (http://www.nj.gov/lps/dcr/law.html) prohibits discrimination based on multiple categories including gender identify and expression in all public accommodations.  The NJ anti-bullying law similarly prohibits acts of intimidation or harassment based on actual or perceived characteristics of students (http://www.state.nj.us/education/students/safety/behavior/hib/ParentGuide.pdf).

Garden State Equality made it so easy for the NJ Board of Education.  They wrote a guidance statement for the state to adopt which is consistent with the aforementioned laws.  Despite having received this over one year ago, Commissioner on Education, Kimberley Harrington, (a political appointee of Governor Chris Christie) has not adopted this guidance.  Instead she has left it to the discretion of individual districts whether or not to adopt trans inclusive policies.  Thus, some NJ school districts continue to discriminate against transgender youth, placing obstacles in the path of their attending school in a life affirming manner.

So, that’s the reason we rallied in the cold.  Christian Fuscarino, Executive Director of GSE, did a tremendous job bringing out a crowd for this rally.  Courageous trans youth, along with their families, told personal stories and warmed our hearts.  Babs Siperstein, renowned trans activist and member of the Executive Committee of the DNC demanded that bullying stop and trans children be given their legal rights now.  Special thanks to the members of the legislature who spoke out for legal protection for our trans youth, including Senate Majority Leader Loretta Weinberg, Senators Raymond Lesniak, Sandra Cunningham, Joe Vitale and Teresa Ruiz, Assmblyman Tim Eustace and Assemblywoman Valerie Huttle.  I’d be remiss if I failed to mention that these legislatures are always on the right side of history.  These are the very same people that spoke out in favor of marriage equality in 2009, when most opposed the idea.  They continue to give me hope for the future of our democracy. 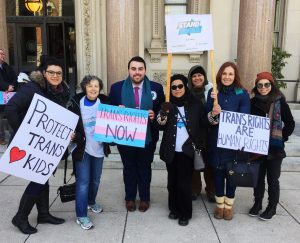 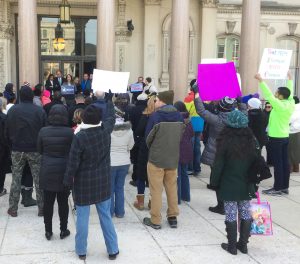 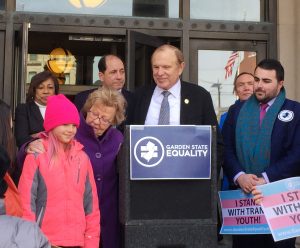 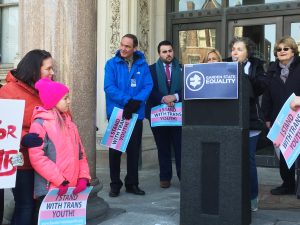 Members of STAND CNJ collected signatures on petitions demanding all NJ children be allowed to attend school in a manner consistent with their identified gender.  Our own Fatima Mughal hand delivered the petitions to the NJ BOE office.

For all who couldn’t attend the Rally, here’s the take away message:  First Christie tried to tell us what a “REAL marriage” was and that our unions didn’t meet his criteria; that was bad, but at least we were adults and could fight back.  Now he and his administration have stooped even lower:  They telling children what their “REAL gender” is and which public facilities they can use.  Not only is this bullying, but it’s also denies trans children the legal rights afforded to them in New Jersey. Please email, call or tweet CHRISTIE and Commissioner Harrington.   Tell them that it’s time to be a REAL governor/commissioner by standing up for all children in NJ.   Trans children deserve respect, dignity and legal protection in accordance with laws against discrimination and bullying.